I’m sitting here in front of my computer with about ten things on my mind to write about.  I have to make a choice between posting a random mish mash of these thoughts or focusing on one topic and coming back to the others another time.  The problem is that whenever I do that, I don’t come back to the other stuff.  To spare you from reading a novel, though, I’ll stick to one topic…but to hold myself accountable to the other things, here’ s an abbreviated list of some of the things on my mind today:

They are all timely, but I’ve decided to focus on Valentine’s Day.

If you’ve known me longer than 365 days, you know that I am not a fan of Valentine’s Day.  It’s one of those “holidays” that people either love or hate or love to hate.  Recently, the Oatmeal posted this comic (warning:  colorful language) and I promised not to rant about Valentine’s Day this year.  If you’re curious about my position, you can read my Valentine’s Day – Bah Humbug post here.  And, then this morning, I asked my 12 year old if he would be my Valentine and he said “I don’t celebrate” and went on to parrot all of the things I have said about Valentine’s Day over the years. My first thought was “Oh no…I’ve ruined him”.  My second thought was “Oh no….my future daughter in law is going to hate me”.  Now, she might hate me anyway, but I decided it won’t be about this issue.  I very seriously told him that unless he is lucky enough to find a partner who lets him off the hook at Valentine’s Day, he needs to suck it up.  Sometimes we do things just to make other people happy.

The fact is that congenital heart defects are common.  In fact, it’s considered by the CDC to be the most common birth defect, affecting nearly 40,000 births in the US every year.  Worldwide, it is a leading cause of birth-defect related deaths.  Despite all this, a relatively small amount of funding is currently available for parent/patient educational services, research, and support. Even more disturbing is that most states do not require newborn screening for some of the most critical heart defects.  The thing is that many times, heart defects will not show signs or symptoms right away.  Without newborn screening and parent education, babies are at a much greater risk of death or disability from their condition than children who are diagnosed within the first 24-48 hours of birth. My own son’s story is a perfect example of how early detection and palliative treatment can save lives.  If he had not been pre-mature, he very likely could have been sent home and we would have had no idea that he had a life threatening condition.

Pulse Oximetry Screening is a simple, non-invasive way to test a the oxygen levels in a baby’s blood.  While this screening does not replace a complete physical examiniation and it does not detect all heart defects, it can alert doctors to a potential problem and the baby can get the additional testing he or she needs.

I am proud to live in a State that has already passed legislation for newborn screening for congenital heart defects.  But, if you don’t live in Maryland, New Jersey or Indiana, it’s possible that babies in your state are not getting this simple test.  If you are pregnant or know somebody who is or might become pregnant, you should care about this.  Since we all probably fall into one of those three categories, we all should care about this.

If you want more information on congenital heart defects or CHD Awareness Week, visit the Congenital Heart Information Network.  These folks have been working hard for years to raise awareness and their website is full of information on CHDs and ways that you can get involved.

CHDs are not something that happen to other people’s kids or people you don’t know.  If you are reading this post you know somebody with a CHD.

And that’s why Valentine’s Day is important to me.  Well, that and less complaining, more sexy rumpus….

Jake has Tetralogy of Fallot.  This picture was taken when he was 3 and full of energy.  It wasn’t always that way, though.  You can read his story by clicking on the picture. 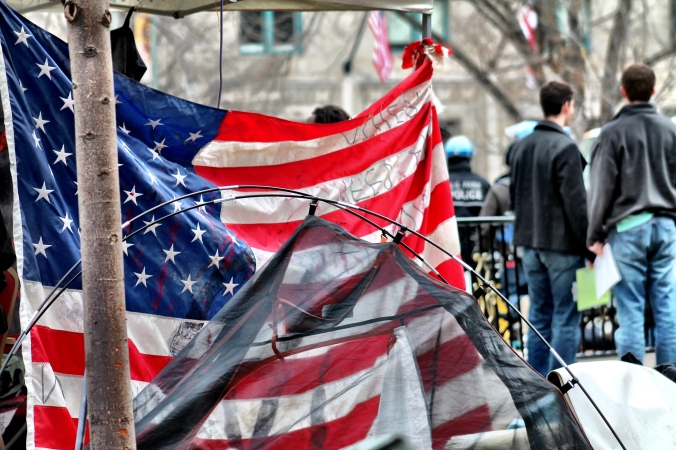 This past Saturday, the National Park Police moved in on the Occupy DC camp at McPherson Square to “further enforce no camping rules”.  Jake just happens to have a class in a nearby building on Saturday mornings, so I wandered down to the park to see what was going on. 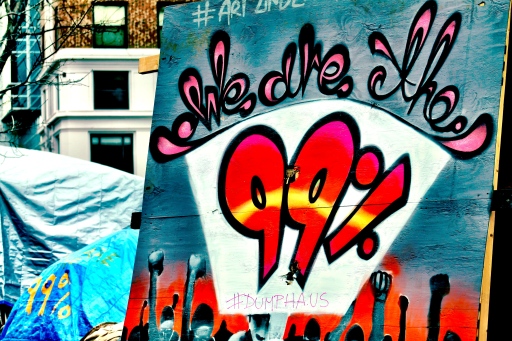 First some diclosure:  I have not been an active supporter of the Occupy movement.

However, I do consider myself part of the 99% that they represent.  I was excited when they first began protesting in October, but as the months have gone by, I just have never really understood what their goals are.  And, this is often the complaint I hear from people.  A few weeks ago, I was getting lunch in a restaurant adjacent to McPherson Square and a group of people from the camp were meeting.  I overheard them talking about what their message was — and the responses were all over the place.  That was nearly 4 months after

they had arrived in DC.

During that time though, from my standpoint, they have acted with civility and have generally been peaceful in their protests.  And, despite an appearance of not having a cohesive message (which, by the way, I know they would disagree with me on),  what I do know is that there is a general unrest about the gap between the rich and everyone else in this country and that it trickles down into all areas of our lives. They are frustrated that people are accepting this as the status quo.  And, I agree with these sentiments.  I also am a strong believer in our First Amendment rights, so I while I have not been an active supporter of the movement, I would classify myself as a sympathizer.

Piles of clothing and bedding taken from tents could be seen throughout the park.

It gets complicated though when you start looking at how these long term gatherings begin impacting the surroundings.  McPherson Square had recently undergone a lengthy makeover, costing nearly half a million dollars. The funds came from the federal stimulus package which directed money toward renovating National Parks nationwide.  The park was beautiful, with new sidewalks and benches, grass and flowers.  Now, after 4 months of people camping there, it is gross.  And, DC residents are angry about it.  I heard a guy, who was arguing with protesters yesterday make a comment that they were destroying “my  city”.  This was met with outcry as even I thought to myself that nobody can lay claim to this city.  This is our nation’s capital.  It’s everyone’s city.

What frustrates Occupy DC folks — and me, as I stood by watching — is that the rules have changed.  While camping in the park has never been allowed, Park Police have been cautious about citing anyone because of First Amendment Rights.  They argue that the core of the Occupiers First Amendment activity is that they occupythe site.  In other words, “occupying” the land in question is a core aspect of the group’s message.  The

occupation is in itself an act of expression and is therefore protected by the First Amendment. The Supreme Court disagreed though (based on a decision in a similar 1984 case, Clark v. Community for Creative Nonviolence) and the Occupiers were notified that the NPS would begin enforcing the no camping rules at the park.  They claimed it would not be an eviction and that tents  would still be allowed as long as nobody was sleeping in them.

So, early Saturday morning, NPS police moved in to enforce those rules.  I was not on the 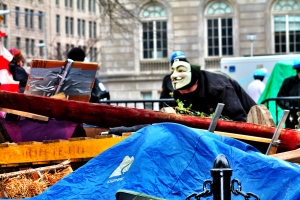 scene until about 10, so there had been a good 5 hours of activity before I got there.  The streets around the park were closed off, but we were allowed to walk.  Fences had been erected around the park, but at the time I was there, you were still allowed to walk around inside the park.  There were piles of bedding, garbage and other items around the park and a group of people in hazmat suits were going through each tent.  That seemed a little excessive to me, but reports are that there were dead mice and rats and other hazerdous material.  What was upsetting to the protesters was that there were empty tents that were being taken down.  Protesters felt they had been lied to and from where I was standing, it

seemed they had been.  Additionally, there were police in riot gear who were stationed around the park, which also seemed excessive.  I know that they need to protect the public and try to keep the peace, but these people do not have a history of violence.  On the other hand, it seemed to me that there were a handful of protestors who were doing their best to encite police.  They were screaming profanities in their faces and calling them obsenaties as they stood stone-faced. There were a couple of times that arguments broke out between protestors and onlookers and the police would quietly move in those directions, but as long as I was there, they did not interfere. 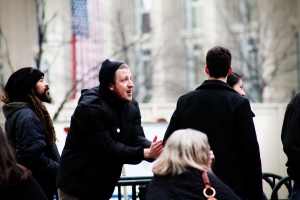 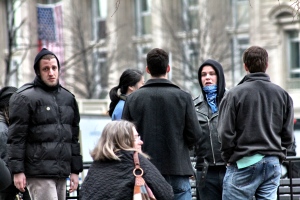 In the hour and a half that I was on the scene, I did feel tensions begin to escalate, mostly on behalf of the protestors who were, I believe, justifiably frustrated with how this was all playing out.

One of the more tense moments occured when an onlooker began heckling the occupiers.  He said he considered himself a “1-percenter” although he clearly wasn’t.  He simply had a different political point of view.  The thing is, the Occupy DC people are smart.  If you are going to engage in a debate with them, you better be as smart and as quick or you will look like an idiot.  This guy sure did.

After I left and the day wore on, things began to deteriorate.  There were several arrests and a police officer was taken to the hospital after having a brick thrown in his face.

I don’t know what happens to the movement in DC now.  The Occupy folks sounded determined to continue, but I’m not sure how much more patience the public has.  But, it is clear to me that they are driven by a sense of justice and that they care about this country and the American people.  And each other.

This week’s lunch conversation included Jersey Shore characters and thier antics.  One girl in my office pointed out that…