We have been in Cancun for several days now. I’m not sure how many because I don’t know what today is. I know that it is the opening day of baseball stateside and that fact is driving my baseball fanatic son crazy. Truth be told, it’s driving my husband crazy, too. But, there is TV here and as luck would have it, the Nationals are not playing at home until next week, so we aren’t missing it.

We are here with our dear friends, whom we met because our boys became instant friends when they were in choir together in Olympia. They are among the few people that I would spend a week with and the truth is, the trip wouldn’t be as fun without them. Our kids keep each other busy and free from boredom. Apparently, you can get bored sitting by the pool. I don’t get it, but it’s what I’ve been told. The adults keep each other busy and free from throttling our kids when they get bored. It’s been a great week so far. Lloyd always dreads taking me to the beach because he’s afraid I’ll never leave. After this vacation, I think he might have to worry about both of us — meaning me and Jake.

The surf lesson started it. I wasn’t sure he’d like it, but Jake will try anything once. And after he got up a couple of times, he was hooked. After his two hour lesson (shared with his buddy), he wanted to know if he could have a lesson every day that we were here. I also want to take a minute to give a BIG shout out to Dave at 360 Surf School in Cancun. He was awesome and really made the difference for the boys. He also saved Jake from getting pulled out by the current when Mr. King of the World decided that he could go further out than was safe. Dave didn’t miss a beat and swam out to get him as the lifeguard stood by and watched (although I am sure he would have helped if needed). He also used it as a valuable teaching lesson, which made a much bigger impact than anything we could have said to him in that moment. If you are ever in Cancun, definitely look him up. 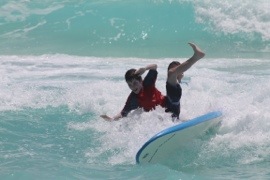 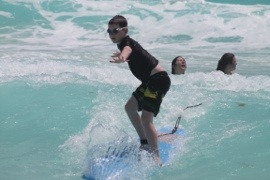 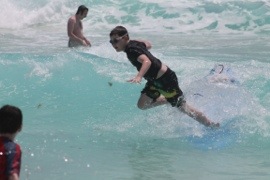 Last night, we went to Margaritaville Cancun to celebrate our friends’ granddaughter’s 10th birthday. It was a blast. We all sang Jimmy Buffett songs at the top of our lungs. Jake had his first “piña colada” and shortly thereafter was on stage dancing. Give this boy a stage and he is completely at home. It’s a little scary sometimes to see him embrace the party scene the way he does, but I envy that he is willing to have fun without worrying what other people think. I wish my dad could have been with us. When I was in 5th grade he took me to see my first concert–Jimmy Buffett at the Greek Theatre in LA. It was then that I decided I wanted to be a Coral Reefer Girl when I grew up. I still want to be a Coral Reefer Girl when I grow up. Now, watching my son sing “Margaritaville” while wearing a Fins Up hat made me smile as I realized we had three generations of Parrotheads in the family.

The best part of the night though was doing Tequila shots with my bestie and then hearing Jake say: “Well, that was awkward”.