One of the interesting things that I’ve noticed about living here is the difference in food choices in grocery stores and restaurants.  I’ve mentioned before that we live in an area that has a very large Jewish population — and it definitely has an influence on food choices and prices.  Rye bread is the most obvious to me.  Everything seems to be on rye bread.  I remember the first time I had rye bread.  I was young…probably 5 or 6 and I remember so clearly ordering a patty melt at a restaurant.  It sounded so grown up and looked delicious….that is until I bit into it and had an immediate gag reflex from the taste of the rye.  And since we didn’t have a lot of money and wasting food was frowned upon, I suffered through that sandwich, picking out the rye seeds as I went.  To this day, I will not eat rye bread.   There is this wonderful little deli across the street from our apartment and the first time I ordered a sandwich but on something other than rye, I was afraid I was going to get thrown out, Soup Nazi style.  My favorite bread is Sourdough — and I’m used to it being a choice on a menu.  Not here.  You sort of get a strange, side-ways look if  you ask for sourdough bread so we’ve learned not to.  You can find it in the grocery store, but it’s never a very large selection, never the best brands and always very expensive.

Also, I had never seen beef bacon before I moved here.  I think that beef bacon probably falls in the same category as turkey bacon — not really bacon and why bother?…..but if you don’t eat pork to begin with, I imagine you don’t really know the difference.  Anyway, I noticed beef bacon for the first time right before ﻿﻿﻿﻿﻿Rosh Hashanah (which, by the way is similar to Thanksgiving when it comes to grocery shopping — I will remember this next year and avoid the store, but someday I want to be invited to a Rosh Hashanah gathering!)…I was stocking up on the buy one get one free maple infused pork bacon when it caught my eye.  Then I started paying attention….pork is relatively cheap here…which makes perfect sense.

On the completely opposite spectrum, there are also a lot of Pennsylvania Dutch decendents in this area (Pennsylvania Dutch are actually Pennsylvania Deutsche — German born immigrants who settled in eastern Pennsylvania).  They eat a lot of pork.  The Pennsylvania Deutsche were frugal people who believe in salvaging all of the pork parts.  Enter Scrapple.  It’s really a sort of pork mush. It’s dictionary defined as “cornmeal mush made with the meat and broth of pork, seasoned with onions, spices and herbs and shaped into loaves for slicing and frying.”  The word, scrapple originates from “scrap” or “scrappy” meaning made up of odds and ends for that’s exactly what it is—boiled, ground leftover pig scraps with cornmeal and spices thrown in.  Most often, it seems to be a breakfast food, but I’ve seen it in sandwiches and casseroles, too.  I am usually pretty adventurous when it comes to food, but I’m not going there.  Reminds me of the time my step-dad tried to convince me to eat head cheese.  But this was the same guy who encouraged Alka-Selzer over Pepto Bismol for a stomach ache, so I knew not to trust him.

And then there is Vrapple.  It’s the Vegan Breakfast treat that “kicks the CRAP out of Scrapple”.

We don’t eat nearly as much seafood as we used to now….salmon is usually farm raised and injected with pink dye.  I am told that you can get Copper River salmon here for a very short time, so I’ll be on the lookout next season.  One thing that Maryland knows how to do though, is crab.  I had to have a lesson on how to eat it, but 4 of us managed to polish off this mound of crab this past weekend and I can’t wait to do it again! 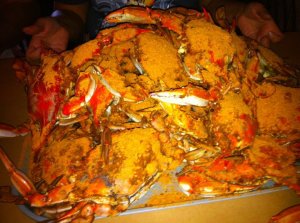 The thing that makes it yummy is the Old Bay seasoning.  And Maryland is very proud of the Old Bay seasoning.  And, while you can buy this pretty much anywhere, it’s a flavor icon around here.  It’s used on chicken, pizza, pasta, corn on the cob, etc.   You can also buy Crabby Popcorn, Crabby Potato Chips and Bloody Mary’s are very often made with a sprinkle of Old Bay.

And speaking of Potato Chips, Pennsylvania redeems itself by making a to die for potato chip.  Utz.  I don’t even really like potato chips – not plain ones anyway.  This potato chip is made simply from fresh potatoes  and cooked in 100% pure Cottonseed Oil and salt — but not too much salt…just the perfect amount so you can actually taste the chip.  There are lots of flavors (including crab), but I just love the plain.

And then there are the things are hard to find here.  Tillamook cheese is one.  Like Sourdough bread, cheddar cheese isn’t a staple….if you order a ham and cheese omelet, you will most likely get American Cheese.  And if cheddar is available, it’s usually New York cheddar, which even in it’s “sharp” form is still fairly soft and not much bite.  I have been able to find Tillamook though — it is expensive, but worth it every once in a while.  On the other hand, goat cheese is plentiful and yummy here and satisfies my need to buy local.

One thing I don’t think I’ll be able to fully embrace is the wine.  When you have come from one the Pacific Northwest, it is hard not to be a wine snob.  Grapes here are very sweet and the result is…..sweet wine of course.  Not in a Gewurztraminer kind of way.  More of a grape juice kind of way.  Fruit wines are very popular here too.  Peach, Blueberry and Strawberry Wine are among the favorite fruit wines.  I am not a fan….although going to the winery with friends is still a great day, no matter what.