I am obsessed with stories.  I’m not talking about books….although I do enjoy a good book (if only I had the attention span to read one).  I’m talking about sitting down and hearing somebody tell their story – learning about their life and the experiences that make them who they are.  It’s not something I have always known how to do — nor did I always understand the value of knowing somebody’s story.  Knowing a person’s story gives you deep insight into who they are and how they react to situations.

Let me give you an example.  I avoid baby showers.  It’s not that I don’t like the idea of a baby shower or that I don’t like babies.  And, my hesitance to attend them has nothing to do with the person who is pregnant.  People who know my story know exactly why I avoid them.  I didn’t get to have a shower with my own baby.  He was premature and I was sick and he was actually born 2 days before my shower was scheduled.  I didn’t resent not having one per se, but I did feel cheated.  Not cheated of gifts, but cheated of a “normal” pregnancy with all of the normal things that go along with it.  Later, we had a foster baby.  She was our neice and we took her home from the hospital and loved and cared for her for 6 months as if she was our own baby.  Again, while she was (and is) a blessing to us, it was a very difficult time in our lives.  Baby showers bring all of those feelings to the forefront.  So, I’m not a scrooge.  I avoid baby showers out of respect for the expectant mother — because inevitably, I cry.  And, baby showers are not a time to cry.

Recently, I was in the nail salon.  Normally, I take my iPhone and listen to music while I’m getting a pedicure.  It’s sort of my zone out time.  This particular day, I left my phone in my car and didn’t realize it until my feet were already in the water.  I despaired over it for a moment and then picked up a magazine.  I began to listen to the people talking around me.  Next to me was a woman who was probably in her 70’s.  The woman giving her pedicure commented on how long it had been since she’d been in.  She began to talk about the chemotherapy and radiation treatment that she’d been receiving for breast cancer.  As I listened to this conversation, I realized that these two women had known eachother for a long time.  They talked about their kids and the pedicurist’s recent trip to Vietnam.  There was silence for a moment and suddenly the pedicurist asked the woman, “Are you scared?”  She answered “no — it just is what it is” and went on to describe her faith and why she was not afraid of death.  When she left, the women hugged and she said “I’ll see you in 3 weeks”.  I marveled at this relationship…..one that exists only in a chair in a salon.  These are people so different that they only met by chance and would never be friends outside of this scenario.  And yet…they know intimate details about eachother’s lives.  They talk about faith and give eachother advice.   This only happens because they have both shared their stories with eachother.  And, through telling those stories, they have developed a trust in eachother.  It’s beautiful.

Knowing your own story is even more important.  It sounds strange to say — because who knows our story better than us?  But, there are things about all of our lives that shape who we are and how we respond  — and sometimes I think that we don’t even acknowledge them.  I think it’s important to process the experiences in our lives and share them in appropriate ways.  I’ve relied heavily on this as I’ve moved to a new area and made new friends.  While I try to be somewhat of a chameleon and blend into situations, I strive to listen to what people are saying.  Many people are guarded at first meeting, but I have become amazed at what you find out by asking the simple question, “What is your story?”.  When you are genuinely interested in listening to people, they will share with you amazing things.  And, you quickly learn that everyone is amazing in their own way.  Nobody’s life is mundane or boring.  And in listening to these stories, you learn that people are trust-worthy (or aren’t!) and good (or not!) — and how to respond to them.

When we first moved here, Jake had no interest in sports at all.  But, after school started, I noticed that he started asking questions about football.  He wanted to watch and learn about the game.  We realized that he had been listening to other boys talk at lunch.  He figured out that football was important to them and so he was learning about it so that he could participate in the discussions.  He didn’t care about football as much as he cared about being able to connect with people.  What an amazing thing to understand at his young age!  But, it’s something we can all learn to do…we just have to want to.

I’ve recently been dealing with a stressful situation that nobody in my current context (besides Lloyd) can relate to — because they don’t know the story — they didn’t live it with us.  I’ve had to reach out to friends who are far away to talk about it and process it.  It feels so good to know that somebody KNOWS you — that you can pour out your heart to a friend who knows your story and they will understand you.  It’s like going home.  I long to develop those types of relationships in my new home…but they will inevitably be centered around things that we experience here and now.  Our experiences are what connect us – but we have to be willing to share and to listen.

There is a saying that “God gave you two ears and one mouth for a reason”.  It’s cliche but it’s true!  Try asking somebody about their story and really listen.  You will be amazed at what you hear, because I really believe that all people want is someone to listen. 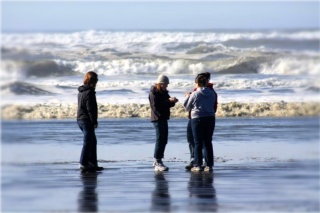