It’s been hard having a 13 year old these past few days.  In the past, I’ve been able to avoid talking about national tragedies by avoiding turning on the television.  I remember being so grateful that he was only 2 on 9/11 because I had no idea what I would have said to him.

Then, Friday happened and I had no idea what to say to him.  But, I had to say something.  I quickly realized that you don’t have to have an answer about “why?”, but the most important thing to do is listen and encourage them to talk about their feelings.  And, as we talked, I found that my sweet son was being as comforting to me as I was trying to be to him.

I was trying to explain to him about how I react to things —  I told him about a character in The Secret Life of Bees that I relate to.  May Boatright is a complicated personality. Highly sensitive to the pain of others, she carries the weight of the world in her soul.  She built a wailing wall in her backyard and goes there when she is upset.  And then I told him that I often joke that I need a wailing wall of my own in the backyard.

He looked at me and said, “Mom, you don’t need to build a wailing wall.  You have one right here”, and he patted his chest.  “God knows what’s in your heart”.

Tears filled my eyes as I looked at this child, who has no idea how wise he is, even though sometimes he still puts his pants on backwards.  I thanked him and told him that this was a conversation I will never forget.

I’ve said it before….I take no credit for how awesome he is.  But, I do like to share the insights he has.  Usually they are funny and light-hearted.  Today, I hope his wise words can bring someone else comfort as well.

Feel free to use this post as your own wailing wall.  My son and I would be privileged to join you in prayer for everyone affected by the Newtown shooting.  And, that means everyone. 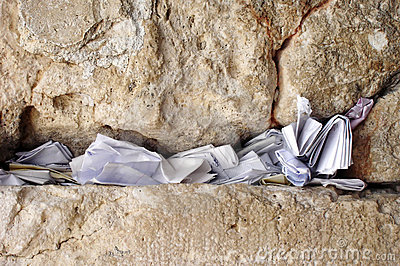 One thought on “Life according to Jake”